You know, this would have been a whole lot easier if you all had just met me in Boston. Make a note of this particular point the next time I travel to see some bloggers, mmkay?

CousinP who I thought was going to be invisible once I made it to Boston actually called me every day to either make sure I was doing OK or to make some tentative plans for some activity or another. Friday morning I met CousinP down at Faneuil Hall and had a little walk amongst the shops and then over to Long Wharf. It was just a relaxed morning that passed pretty quickly so we took a break by having lunch at Tia’s and people-watched in the comfort of a warm breeze while sitting in the cool shade. 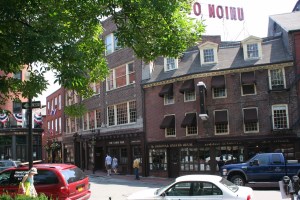 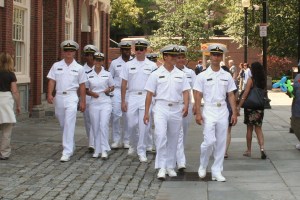 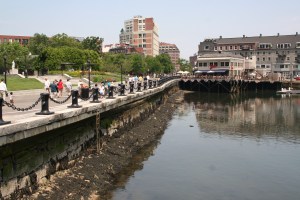 We followed up lunch with a stroll through the Haymarket. It was like walking through a living, breathing cornucopia but not just in the colors and smells of the produce, but in the blends of cultures and languages. I found it strangely beautiful in its organized chaos and didn’t get as wrenched up as I normally do in a tight crowd.

I mentioned to CousinP that I had hoped to take in one of the infamous Boston Duck Boat Tours, which in other trips to Boston Sparring Partner had scoffed. He hates playing tourist. Phooey on him. Once my ticket was secured, CousinP drove me to one of the start points of the tour and shortly after I climbed aboard one of the massive amphibious vehicles. I admit I was disappointed that of all the colors and patterns I had seen driving back and forth on the streets, the all-over brown was less than inspiring. Why, yes, I am petty. At least I scored a window seat, but since I was traveling solo, I had to share the second seat next to me with a stranger. STRANGE-r in every sense. 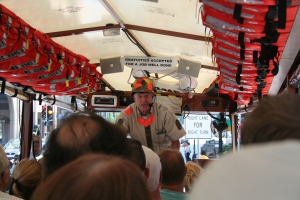 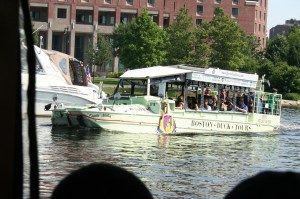 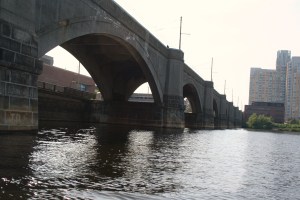 The tour ended at the same place it began, which in this instance was the Prudential Center. CousinP had only a couple of minutes during the time he dropped me off to try to explain what line on The T I needed to catch to get back to station closest to the hotel. Unfortunately, when I entered the station I was immediately overwhelmed because nothing seemed to jive with what CousinP had told me so I exited the station and figured that there was probably another close by (please, I can hear all of you who have traveled The T in the past laughing hysterically at my ignorance, so try to reign in the guffaws).

I decided to walk in what I had hoped was the general direction that led to the center of the Financial District where Faneuil Hall, and my hotel, could be found. If nothing else, I could flag down a taxi and be done with it. However, I soon found that flagging a taxi is only a possibility if you SEE a taxi. So I kept walking. The sights were familiar as we had passed them during the tour. I was getting hot and thirsty, but I kept walking.

And it kept getting hotter.

I was never so thankful than to see Boston Common and then to find myself walking in the Public Gardens. The same path I had taken with Serenity and Heather. I had avoided all the sidewalk vendors until then when I finally approached one to purchase a gator ade, which she was out of. I walked away with a large bottle of water, and while all I wanted to do was just sit on one of the benches and take a rest, I knew that if I did, my feet would hurt even more. So I just kept walking.

When I found myself within 15 minutes of the hotel, I received a phone call. It was Pamplemousse. She and Millie were at the hotel, enjoying the complimentary Wine Happy Hour and wondering where I was. I told her I would be there shortly, and with a new sense of purpose I plodded on in the heat.

I finally passed through the revolving doors of the hotel and literally into the arms of Pamplemousse who pulled me in for a hug even before my eyes had a chance to adjust to the dimmer lighting of the hotel.  There I was, being hugged quite soundly by a perfect stranger. Perfect, and no longer a stranger. The inspiration for the entire trip was standing in front of me with a huge smile on her face, just for me!