I had just found myself in the arms of a stranger when we last left off. Pamplemousse was one of the hundreds of bloggers who I have met on-line that I never, ever thought I would have a chance to meet I-R-L (In Real Life). She’s the reason I was determined to make this trip. While there are others from over the sea I (and of course, state-side) would love to someday meet in person, I knew I had to do what I could to meet Pamplemousse now as the likelihood of me ever getting out of the country later is less than nil.

But here she was! Standing with a glass of wine and a big grin on her face in front of a couple seated in the lobby. My first thought when I looked at the couple was, “Oh my god! Millie dyed her hair blonde!” but when Pamplemousse walked me to a table in the lounge where another couple was seated, I realized (with relief) that Millie hadn’t dyed her hair. I had just assumed the first couple was Millie and her husband, but it’s just because P is so outgoing and friendly that she had struck up a conversation with the anonymous couple.

Millie was sitting at one of the small tables and across from her was Pamplemousse’s husband, who we will call Head Banger, a nickname I was guessing he had been dubbed in the past by Millie. If it hadn’t been for the fact I was severely hydrated, I might have peed my pants right there and then in excited. But as it were, I was so parched that when P passed me a cold glass tinkling with ice I threw it back and took a gulp before realizing it was wine from the hotel’s happy hour they had saved for me. Heat exhaustion and wine? Not the best combo, but hell, you only live once right? 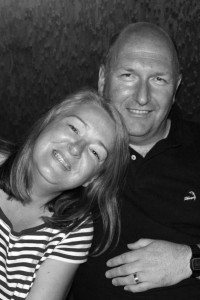 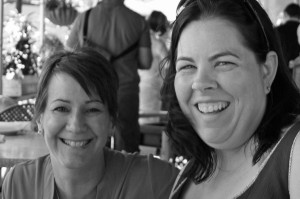 We decided to refresh ourselves and then go out for supper. Pamplemousse followed me into my room (we were all staying on the same floor) and before I could warn her I had stripped off my sweaty shirt and replaced it with a fresh one. Yes, I flashed someone I had only met less than an hour before. It goes without saying that I’m both cheap and easy.

Once we had all reconvened in the lobby, we asked where we could find a good Italian restaurant (as Head Banger was craving pizza and where else would one assume you could get excellent pizza…or at least where could *I* assume to get excellent pizza), which the concierge recommended Bricco’s in the North End. They even called and scheduled reservations for us with enough lag time for us to walk leisurely from the hotel. It was then that I also got to meet Millie’s husband, E., and their adorable 10mos old daughter, L.E., who up till then had taken the time we were in the lounge to relax in their room.

The walk to the North End was brief and we found Bricco’s easily enough. Since we were very early, we continued down the street and took in some of the sites and then doubled back around as we were soon closing the gap on our 8:30 reservation. The host told us they weren’t quite ready yet, but it wouldn’t be long. Unfortunately, he told us that in three different editions with the third time at around 8:50. Either Millie or Pamplemousse spotted another Italian restaurant, Lucca’s, across the street (let’s face it, though: they are ALL Italian) and I volunteered to run over to see if they had an opening, which thankfully they did. 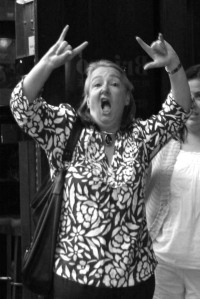 While the food was good, there wasn’t a single pizza option on the menu. I think what we all enjoyed the most was L.E.’s sweet disposition even with as late as it was getting and being around strange faces and strange surroundings. We all got to witness a first: her first taste of garlic bread, which she gummed happily as if eating with a rapt audience was an everyday occurence. 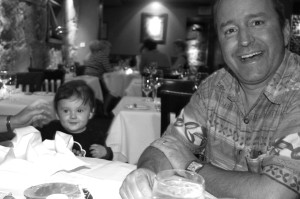 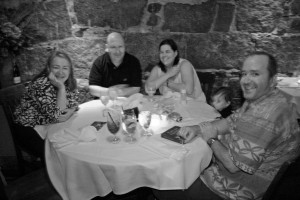 By the end of the night when we all settled into our rooms, even if I was to leave the next day, my trip would have been well worth the angst. Would you believe that Millie and Pamplemousse wanted to spend even more time with me? That or they were playing a really cruel joke on me.