The night before my surgery I woke up pissed. I was thinking about that stupid pregnancy test and it just made me angry. If my word that I definitely am not pregnant wasn’t good enough, then why do they bother asking?? I thought of all the snippy responses I could make including, “If my test came back positive then I wouldn’t need the surgery, I could heal myself and everyone in the general vicinity.”

The surgery itself went well I guess. It took about an hour and a half. I was a bit shocked to see my right foot bandaged from toe to knee, wrapped in an ace bandage and fortified with a hard splint. Not sure why they didn’t just boot me. While the option of a skin graft was there, it wasn’t until I moved on the gurney that I realized that’s exactly what had happened. The graft site was on the back of my thigh, just under my buttocks. I realized painfully, that the site is exactly where a toilet seat hits when I sit down to pee. 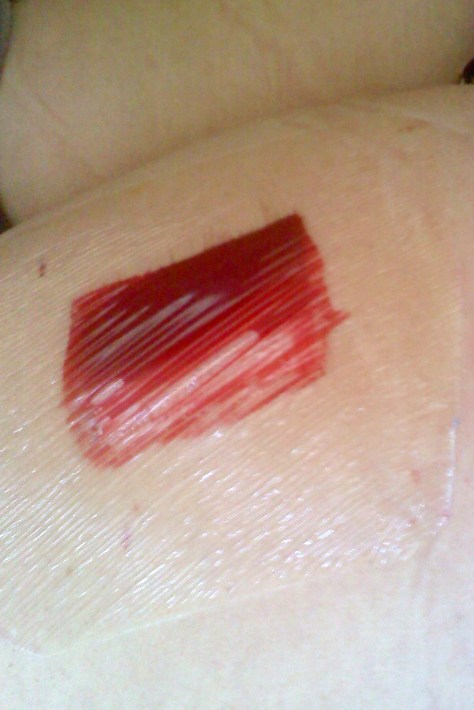 My left foot looks fairly normal with a wadded hunk of gauze taped to the arch. It also hurts like a mo-fo.

The dozen steps I had to take between the gurney and the bathroom in post-op made me realize that not even my c-section surgeries hurt this much. On the two-hour drive home from the Metro, we had stopped at a gas station to get something to drink. I think the combination of morphine, percocets and vehicle movement were too much and I nearly threw up in the back seat of the van. The wave of nausea passed but I just felt like crap.

Once we made it back into town, I started dreading the walk that was necessary to get me from the van to the bedroom. There’s no way Sparring Partner could carry me, with his back in poor shape. So we stopped at the in-laws and borrowed an extra walker.

Yes, you read that correctly. A walker. It has been a godsend. Now originally, the oncologist thought that this surgery wouldnt hamper my ability to go to work the day after. I’ve quickly realized that I won’t be going back to work (it’s another temp position) until Monday. The doctor’s instructions are laughable: “toe touch weight bearing”. Not sure how one walks with just toe touch on both feet. I would need a pair of fucking wings for that. Going from the garage to the bedroom was excruciating: I was crying half-way there, which is at the kitchen table where Doodicus was sitting with his homework. I saw from the corner of my eyes (full of vision blurring tears) that he was staring at me, afraid to say anything. I’m not sure he’s ever seen me cry in pain. 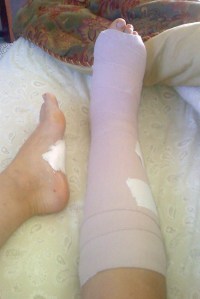 I return to the Metro on the 20th to have the splint removed. By then the path report should be back on the second mole. By then, I should only be limping. By then I will be dying for a bath or a shower as I’m not allowed either since there’s no way for me to keep one entire leg dry. It’s whore baths for the next week. You better count your lucky stars that you are where you are and I’m where I am. Not that I’ll get too stinky, but because my mood is most foul. Until I have my perc and then I’m a happy camper. A sleepy, nauseous and wounded camper.