Aside from the edema and debilitating carpal tunnel during my third trimester with Aitch, my pregnancy was relatively uneventful (it was the getting pregnant that was unusual). However, I noticed that my fingernails – specifically the first two on my left and the first on my right – would start to curl down as soon as they grew past the finger. I meant to blog about it then but you know how it is when it comes to blog posts. Or maybe you don’t. It’s irrelevant because I’m blogging about it now.

The reason I’m blogging about it now is because even though the nails stopped curling over shortly after I had Aitch, I noticed recently that my Eff You finger on my left hand is doing it again. With the way my luck has been running, it probably means I’ve ingested some weird African parasite brought over to the U.S. via a chameleon smuggled with the help of analease and some valium by the barista at my favorite coffee stop and eventually my nails, my hair, and eventually my arms will turn purple, rot and fall off. Or not.

So here’s another photo for you to deliberate. Yes, it was taken in front of a web page that discusses the possible reasons fingernails curl.  I especially like the “can indicate physical or mental stress” line. 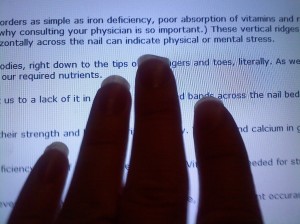 See? The nail is just as long as the ring finger’s, but because it’s curling (more on the right side than the left), it looks like the nail’s broken, which it’s not.  You thoughts on this mystery?