My mother’s mental health continues to deteriorate with the momentum of a snowball on a mountainside. In short, if Aitch was still an infant instead of a fairly self-sufficient toddler, I would no longer let her stay alone with them once a week for a few hours. She was here today and as I sent her off, I realized it won’t be too far in the future before we’ll have to strip her of her driving license.

This past week, of the three part-time jobs she has in her hometown where she cleaned offices, she was fired from one. She had forgotten to lock the doors behind her. A small town of less than a 1,000 where people don’t lock their doors on their cars or homes, but when it comes to the town bank? Well, obviously they were justified. The other two businesses keep asking my brother to talk to her about quitting. We are of the opinion that if she isn’t doing the job, then they should also fire her. And that’s what my brother tells them. He’s not going to make her quit. They need to grow some balls. She’s 80 ferchrisakes!

The “new” car she bought a year ago has been scraped up from her poor parking skills. I am only hoping that another vehicle hasn’t been involved, but I’m not optimistic. I can’t ask her because she won’t know. She asked me if I can get out of my car when the engine is running. I’m going to let you contemplate that question for a moment…

I was able to quickly deduce that she’s been trying to open the door to her car when it’s still in drive (or reverse – whatever) and of course, as a fairly modern safety feature in every car, the doors aren’t going to unlock unless she puts it in park. Clearly she’s not even remembering to put the car in park before trying to exit it! She can’t figure out how to work the A/C so my dad, who won’t bother even looking at the car, told her to take it to the shop to have A/C put in it. It’s a Cadillac (albeit an older model). That’s pretty much standard. When I looked at it, the message on the read-out says, “Coolant low – A/C not on”. Right there in front of her nose! She would have taken the car to some garage and they would have fucked her right over, crazy-old-lady needing air-conditioning installed on her 2001 Caddy.

The icing on the crazy-cake is her desire to fold my laundry when she’s here. I try to get as much done over the weekend just so I don’t have the extra work that she actually creates in trying to help me, but this weekend was consumed by a sleepover, zoo trip two hours away, and a single-parenting stint. Right before leaving to run some errands, I told her not to put the clothes that were in the washer into the dryer. It was filled with clothes that can’t be dried on high and that’s the only setting she knows how to work. When I got home, she had forgotten my request and my low-heat-to-dry clothes were a wrinkled pile of fabric and I was pissed. She just shrugged and said I hadn’t told her not to dry them.

Here’s my bedroom floor after she folded some clothes. 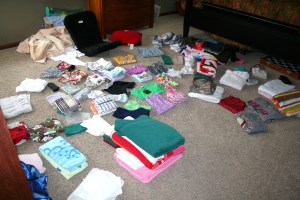 The many piles are because she doesn’t remember already starting a pile of one kind of thing, say kitchen linens, so she starts another, and then another. I know it sounds petty and maybe even heartless, but these were not issues only a couple years ago, which was why she was able to watch Aitch once a week when she was just a three month old.

My parents are now both in their 80s. My dad’s health is crap. After fracturing his back this winter (and fracturing his hip the winter before) he had for a short time quit drinking, but now he’s back to saucing it up. He’ll be found impaled on a piece of tractor machinery or hell, quite possibly a pitchfork, one of these days. He’ll go out the way he wants: on the farm. It’ll be easier to put mom in a home if he goes first.

One of my sisters and I were talking about which way we’ll end up when we’re that age. Will it be our health or our minds that go first? It’s a 50/50 shot either way. I’m hoping it’s my health, but with the way I’ve been feeling lately, it’ll be the latter.

12 thoughts on “Mind Over What Matters”