What a difference having a job makes. A couple of months ago before I finally got a job I was in Hobby Lobby and I discovered a cake mold for a Hello Kitty cake. It was $15. I put it in my cart and walked around the store for some more before realizing that a simple sheet cake in a pan I already own would work just as well thus saving me $15 I could spend on a gift instead. I did one of those things that peeves me and just put the pan on the first shelf I passed while making the decision instead of returning to the cake decorating aisle. I might have been looking at pillows or styrofoam balls, who knows. Last weekend I returned and bought not only the mold but Hello Kitty temp tattoos and some bright pink forks that will probably never again see the light of day. Guilt free.

BTW, before I forget, “expensive” food coloring goes bad after a couple of years. I bought the pricey gel and we discovered the hard way that it gave the colored icing a funky and bitter aftertaste. I’ll stick with the food coloring that probably causes sclerosis of the liver, but at least my frosting won’t taste like ass.

Of course you would think that since Aitch’s birthday theme had been on my mind for months that you wouldn’t have found me an hour before meeting the in-laws for supper where we would present her cake putting the final THREE colors of frosting on her cake. Thank the sweet baby jesus that 90% of that cake was white. However, next year I want to shake it up a bit and make H.K. look NOT like H.K. Like maybe a zombie H.K. or a Spiderman H.K.

Speaking of which, why does it seem like the underwear for little girls are of crappy quality compared to boys’? For Aitch’s birthday, my present to her was to take her shopping for whatever kind of underwear she wanted because of course she will instantly decide that being three is the perfect time to be potty trained.

Do I even need to add the hysterical and/or sarcastic laughter here?

Before we hit the Bullseye store, she said she wanted panties (yes, I’m sorry, but we are calling them “panties” in this house even though the word brings images of pedobear to my head) with Spiderman on them. Now of course I knew we’d never find S.M. on panties, but hey, boys’ briefs should be an easy substitute, right? Well, momma failed to provide her baby girl what she wanted for on her birthday because Spiderman, as illustrated by Marvel comics is too scary to put on little kids’ underwear. However, in her size (2T/3T), I can find Spiderman in this pack of Superhero Squad briefs: 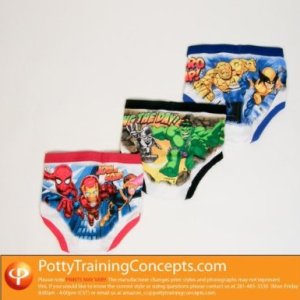 Do you see Spiderman? Yep, he’s right there! Where? Right there, on your underwear!

First of all, these characters look like baby superheros and that’s NOT what she wants, and I’m sorry, even with my job I can’t justify $10 for one pair of underwear with Spiderman taking a back-seat – or shall I say back left ass cheek – to Iron Man and *squinting at the picture* Cyclops.

So anyway, boys’ briefs compared to girls’ panties. Why are briefs made with what feels like thicker and softer fabric than panties? Why do panties have those skin-cutting elastic waist- and leg-bands compared to briefs’ wider stay put banding? And why do briefs have the “flap”? My son is nine and I’m sure he still has no idea what the “flap” is for. And I’ll be a monkey’s uncle if I’m going to tell him. The kid barely finishes peeing before he’s pulling his pants back up creating all kinds of embarrassing wet spots. Maybe that’s just MY son??