A drive with two younger children will make you appreciate the smaller things in life. Like handheld gaming devices, smart phones, and DVD players with wireless headphones. I’ll admit that this past weekend’s trip to Denver and back is making me seriously rethink our Disney World trip in February. Sparring Partner and I have been to Colorado a handful of times and we find it both inspiring and rejuvenating. The scenery is never boring, even in the very eastern part of Colorado where the only thing to break up the horizon might be a small oil rig or a farm of wind generators. We thought that Doodicus might enjoy the adventure. We imagined him awestruck by seeing the mountains for the first time. We did not foresee what seemed to be his endless whining and complaining, including the statement, “This is lame!” Ah, the age of 9… We pressed on making the most of the trip. Our hotel in downtown Denver was perfect in both accommodations and view.

We were a five minute walk from the 16th Street Mall where the four of us enjoyed a handsome cab ride at dusk. 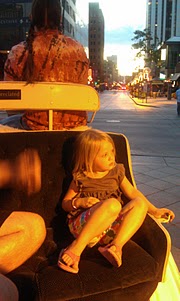 Sparring Partner and Doodicus attended what was our son’s first professional baseball game at Coors Stadium. While they were at the park, I met up with an amazing blogger from the area, Lori Lavender Luz. Many topics were brought up while none were finished thanks to one pee break, one poop break (false alarm) and a teary breakdown after taking a thunk to the forehead. I’m referring to Aitch on all three interruptions, by the way. I was further honored when she said that after mentioning to Melissa Ford she was meeting with me that Mel told her to tell me “Hi!” I forgot (or maybe that was the first potty break request) to return the greeting, so “Hellooo!!” to Mel if she’s still reading.

During our trip if we weren’t driving or eating, we were checking out the pool of whatever hotel we were staying in. The pools (I accidentally typed “poos”, which is ironic) were sub par at best. One had the free-weight equipment right next to the pool, including the exercise balls, which was made into an improved beach ball by a group of drunk youth. Another pool was totally grody to the point you couldn’t see the bottom and the chlorine levels were so high, we choked on the fumes. And for some reason, I can’t remember the third…whatever. It sucked, too.

One of the best parts of the trip was Garden of the Gods. It was the only site the kids asked to see again, so we actually went back the next day when everyone was wearing shoes instead of flip-flops and I wasn’t wearing white pants.

On our last full day, we took the cog wheel railway up Pike’s Peak. When I researched ticket prices, I thought they were a tad high, but after all was said and done, they were worth the $40 per adult (children’s are lower). I was surprised when Aitch fell asleep literally in my arms on the way up. The gentle swaying of the train, the ceaseless noise and the fresh air did her in.

The day couldn’t have been better for a trip up the mountain. It was above 80 when we left the station and 50 at the peak (windchill around 40-something), but clear and relatively calm. The next morning as we were leaving Colorado Springs, you couldn’t even see the mountain range.

Doodicus enjoyed a couple donuts at the top and some photo opportunities with his dad as I was inside the gift shop (tourist trap) trying to make Aitch happy after she woke up cold and in unfamiliar surroundings. She was easily appeased with a stuffed fox that she dressed up in her bracelets all the way back down the mountain, which is when she also discovered a hole in one of its seams (cheap touristy crap!).

Aitch did really well on the entire vacation, only asking to go home the day before we actually did. At the last hotel we stayed at, I slept with her. I was already awake when the next morning I got to watch her come out of her slumber. She opened her eyes, saw me and smiled. Then she reached out her little arms and pulled me in for a kiss. Seriously, that girl heals me in so many ways. Potty training started almost suddenly the weekend before and even though we traveled long distances with her in a diaper, she wore underwear most of the time (with the exception of bedtime) without incident.

Doodicus liked the rock scrambling and the arcade at the travel center in Grand Island. What can I say? He’s nine- going on four. I was thankful for the meds which kept me from clubbing him with a rock when he made the “this is lame” statement.

We found most everyone to be friendly and warm, and not just staff. Something those here in Nebraska who spew the most about “Midwestern Values” should take note of. It’s beautiful out there. I strongly recommend you make a trip to the Colorado Springs area. 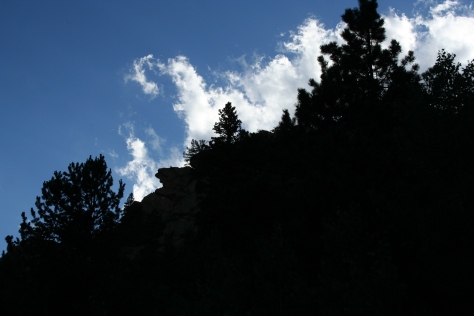